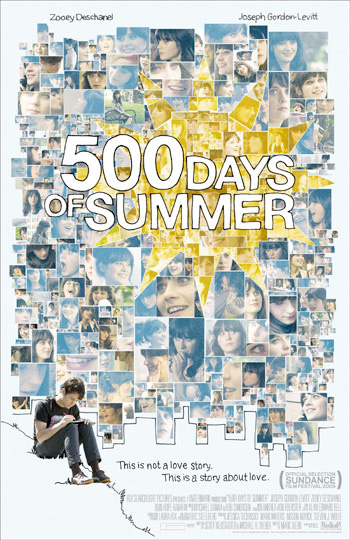 The best movie I think I’ve seen so far this year was The Hurt Locker.  The most entertaining movie I think I’ve seen was 500 Days of Summer.  As the poster, the trailer, and the prologue all indicate, this isn’t a typical romantic comedy.  ‘The Guy’ in this one (played by Joseph Gordon-Levitt) believes in true love and finding the One.  ‘The Girl’ (Summer, played by Zooey Deschanel) is much more free spirited, and not into the relationship game as much.  The guy is a little on the simp side for my tastes, but that’s the nature of the story that’s being told.  (Although I’ve already had a fun conversation with one of my buddies about how long you let your homie get strung along by some girl who’s not into him as much as he’s into her.  My answer: it’s a movie, you kind of roll with it.)

The brilliance of this film to me is in the structure of how the story is told.  Mostly non-linear, there’s a series of devices used to keep the story popping.  One involves one of my top ten favorite songs ever (check out the trailer for a hint), there’s a sequence that plays to the film snob in me, split-screen is used really, really well in this movie.  Anyway, if you haven’t seen it, I highly suggest doing so.

Oh, one last note.  My favorite cutie from Friday Night Lights, Minka Kelly is billed as a co-star in the film.  I won’t ruin her part for you, but I’ll say if that was a ‘co-starring’ role, I’m closer to getting my name on the marquee on a regular basis than I thought!