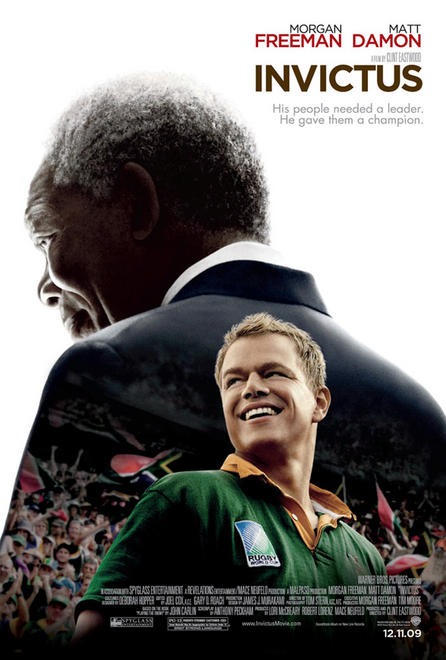 Invictus tells the story of the 1995 South African rugby team.  Hyped up by the newly elected president of South Africa Nelson Mandela, the rugby team goes on a great run in the 1995 World Cup.  (I won’t ruin it for you if they won or loss; rugby is not my forte so the outcome didn’t automatically register with me).  I have no idea how Clint Eastwood is still directing quality films at his age, but he is.  The first half of the film is about Mandela using the rugby team as a metaphor for bringing the two races of his country together; in the last act a sports film breaks out.  If you know Eastwood’s directing style (slow burn, working the plot to its breaking point) you probably know what you’re getting into here.  His style is what it is, so if you don’t care for his other movies too much, this isn’t the one that’s going to ‘win you over.’  A few other quick points from me:

I’ve raved before about my respect for Matt Damon as an actor.  And the cat is still so young!  Hollywood is a different animal than sports obviously, but when Damon’s career is done, it will be interesting to see where his name is mentioned with the all time greats (keep in mind, he’s already won an Oscar, headlined an action franchise, established his comedy chops and I believe he won People’s Sexiest Man Alive a couple years back (don’t quote me on that last one)).  And like I said, he’s still a pretty young guy.

Morgan Freeman was Mandela’s hand picked choice to play him in a movie.  No surprise he pulled it off: the gait, the accent, the dignity and the quiet charisma.  Others have said this before me, but I don’t feel like this was Morgan’s best work.  He did great, but Mandela (the character in this movie) didn’t have much of an arc.  We get all the references to what he was before, but all that happened before the film’s story started.

I doubt I was the only one (and if I was, leave me alone), but I’ve known the poem Invictus for a long time; I learned it as a teenager.  I know it wasn’t intentional, but for someone like myself who memorized the poem in a different way; hearing Morgan’s slow, Hollywood, melodramatic recitation left me chuckling a little bit.  I could never get away with saying it that slow in my day….(but it really is a tremendous poem for those of you unfamiliar with it).

All things considered, I wouldn’t be surprised if this film is one of the TEN Best Picture nominees (yeah, it’s time to start thinking about that) off of name recognition alone.