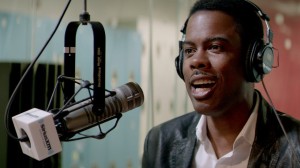 The comparisons to Woody Allen’s most popular films are appropriate for the most part.  In this film, Chris plays an ‘alternate version of Chris Rock’: a hugely successful stand up comedian who’s successfully transitioned into mainstream Hollywood stardom.  But as ‘Top Five’ starts, ‘Andre Allen’ doesn’t want to be funny anymore; he wants the audience to take him seriously.  So what role is Andre promoting to get as far away from his comic persona? The leader of a Haitian slave revolt.  (Personally the character Rock is playing reminded me WAY more of Eddie Murphy’s career arc than Chris’.  Another conversation for another day.)

As every trailer and commercial implies, this film is loaded with stars and cameos.  I’ll just pick out a few of my favorites.  First, Cedric the Entertainer.  I’ve loved one of the Original Kings of Comedy long before he ever showed up in anybody’s movie.  And he KILLS his section of the film.  I can’t even remember the character’s name, but I know HE’S THE MF’N MAN IN HOUSTON DAWG!

Rosario Dawson.  Speaking of Top Fives… (shaking my head).  Off the top of my head, I don’t know who is the current title holder, but playing ‘the Girl’ in this film certainly is another notch in why Rosario is a First Ballot Hall of Famer for most Hip Hop Heads.  Others could have played this part but it really feels like it was written for Rosario.  My film geek pet peeve about ‘romantic movies where the leads aren’t selling it’ is well known at this point; I have to say, Rosario and Chris really vibed well to me.  Maybe a little surprisingly so.

Finally, out of all the cameos, the best one to me happens in the last 20 minutes or so of the film.  I can’t really say anymore without ruining it, but my father was one of many people in the audience who was howling in laughter.  Then after the film was over, he asked me if ‘That Guy’ was somebody famous.  Just a hilarious bit.

Anyway, if you haven’t seen it yet cause you don’t think ‘Chris Rock movies’ aren’t usually that good, trust me, this is the exception.