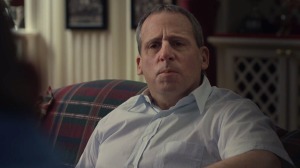 Very sad and disturbing, but all in an entertaining way.

Like the other nominated movies that are ‘based on a true story’, you can Google the real people and get all the broad strokes and facts of this story.  The beauty of the dramatization in Foxcatcher is in the deadly three way relationship between the Schultz brothers (played by Mark Ruffalo and Channing Tatum), and their sponsor John Du Pont (a worthy Oscar nomination for Steve Carell.)

A brief setup of the film: the Shultz brothers are world class wrestlers.  David is the elder, the All-American hero with a pretty wife and two lovable kids.  Mark has also made a name for himself, but has forever lived in the shadow of his older, more popular brother.  In walks creepy heir John Du Pont with dreams of sponsoring the 1988 Olympic wrestling team, and away we go…

What everyone is talking about with this film is one of our great funny men playing the ‘loser’ card not for laughs but for villainy.  Like all three dimensional heels, there’s a degree of sympathy built into the story (and why is there always a domineering, disapproving mother, in this film played by Vanessa Redgrave?).  All that said, when we get to the end (which you probably know going in), it’s still a really heartbreaking conclusion.

Not a story to watch for ‘fun’, but one of the year’s better films I have to say.