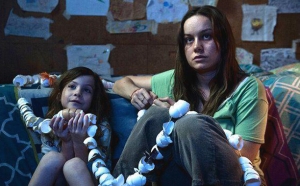 Brie Larson first showed up on my radar when someone turned me on to ‘The United States of Tara.’  ‘Short Term ’12’ put her on everybody’s radar in terms of ‘OK, she can act.’  And now, ‘Room’ is justifiably giving her the chance to really do anything she wants.

Told from the point of view of a child, ‘Room’ tells the story of a young woman taken into abduction, who tries to give her child as ‘normal’ a life as possible. Jacob Tremblay plays the narrator here; along with Abraham Attah in ‘Beasts of No Nation’, this is one of the two best performances by an actor this year, regardless of age.

Joan Allen and William H. Macy (the master of playing someone in over his head) round out the main cast of one of the best acted films of the year.