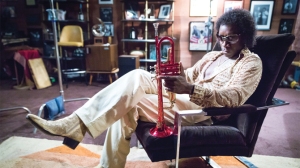 Even if, as the myth goes, ‘Every actor really wants to direct,’ every actor can’t.  Completely different skill set, you have to be open to so many other things outside of yourself, while still maintaining ‘your vision’.

But Don Cheadle can.

His debut feature, ‘Miles Ahead’, is a fun film that, if you have to give it a genre, I guess you’d throw it in ‘biopic’, but it’s really about a moment in time in the life of Miles Davis.  Kind of…

The setup: during Miles’ retreat from the scene in the 70s, a Rolling Stone reporter (played by Ewan McGregor) goes to interview the famously reclusive musical genius on the verge of a (studio induced) comeback.  From there we get not a full life story, but a window into where Miles may have been at that moment, with flashbacks to his marriage to his wife Frances (played by Emayatzy Corinealdi who some of us recognize from Ava’s Middle of Nowhere).

From jump I remember Cheadle saying he wanted to make the type of film Miles himself would approve of.  Personally I think he did.  As I alluded to at the beginning, you have to put it into a category because, business, but it’s very individual.  More because I’m a film geek then guilt by association, the time period and ‘directorial debut’ reminded me a little of Confessions of a Dangerous Mind.  You’re never lost as a viewer, but the style of the storytelling has you questioning at the end, ‘How much of this really happened and how much was amplified for my entertainment?’