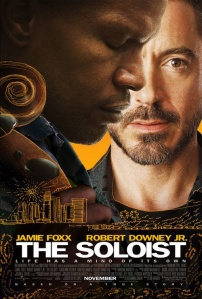 He’s a clown, he’s one of the funniest fools in Hollywood, but movies like The Soloist remind you that Jamie Foxx can really, really act.  This film was originally supposed to come out during awards season; we got a long way to go to get to award season 09 but Jamie’s performance here could easily be one of the better ones I’ll see all year.  It’s always a tricky thing in film to portray someone who is ‘mentally ill’; the medium gives you a lot of leeway in how you portray it, but at the same time if it comes off too cute it can feel patronizing.  I won’t spoil the device used here; I will say I thought they handled it well.

Part of the ‘point’ of the movie seems to be to highlight the plight of the homeless (especially here in Los Angeles).  My second apartment in LA was downtown, so I have my fair share of stories, some funny, some not.  Growing up in the Midwest, homelessness wasn’t something I really had any experience with.  At least not on a mass scale.   I’ve always been sensitive to how delicate life is though; you just don’t know what God has planned for you.

I have a feeling this movie got pushed back because the studio didn’t feel Downey or Foxx had a snowball’s chance in hell of mixing it up with Heath Ledger and Sean Penn last year during the awards push.  And they were probably right.  That doesn’t mean this isn’t an interesting movie about a very real, modern day issue though.