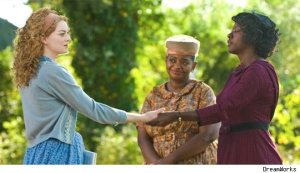 Count me among the many whose face curled up in disgust as soon as I heard the re was a movie about black folks called ‘The Help’.  I mean, really?  That was the best title they could come up with?  There’s a very short list of actors at this point who I would consider ‘dream colloborators’, but Viola Davis is on that list.  So hearing that she was in this film bought it a little bit of rope.

Next I heard that this was based on a popular book.  That and knowing all the main charaters were women sent me next to my mother to see if she saw the movie or read the book.  I’ve made reference before to my roots being in the South; so when my mother told me that the book and film gave her flashbacks to her teenage years (i.e. for a brief period of time, she was ‘The Help’), well, now I had a vested interest in seeing this film.

There’s nothing groundbreaking in the film in terms of story (‘black people really got the short end of the stick during Jim Crow’) or as a movie about racism (‘there’s the one educated white person who’s ready to tear down Jim Crow and side with the blacks).  That doesn’t mean I think it was a poorly made film either; as award season comes around I think ‘the Help’ will be remembered more for the performances than for its whole.  Emma Stone as the ‘ugly girl’, Jessica Chastain as the white trash girl, Bryce Dallas Howard actually being very convincing in the part I imagine they offered to January Jones first.  Sissy Spacek and Cicely Tyson in bit parts that were both very memorable.  On a side note, I half jokingly wondered if Cicely Tyson just rents herself out to ‘questionable’ projects; like a safety net to let folks know ‘if Cicely Tyson is in it, it can’t be racist.’

This is Viola Davis’ film though and to no surprise she carries it.  I’ve already heard the ‘O’ word thrown around a little bit.  I cringe a little when I think about the parts and scenes that have won black women Oscars (see Butterfly McQueen and Halle Berry), but we can cross that bridge later if it comes to that.

The film has been at the top of the box office for a minute now, so it’s worth being part of the conversation if you haven’t seen it:

2 thoughts on “The Help”