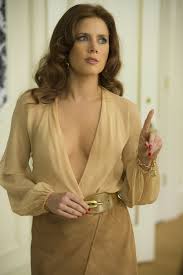 Don’t know if it’s the best film of the year, but I get why everyone is into American Hustle.  It’s fun.  It’s a lot more fun than most of the ‘serious’ stuff that gets promoted for awards season.

As the opening title card suggests, the film is loosely based on the well known ABSCAM stings the feds used to bring down power players in the 70s.  The story of this film centers around the con artist played by Christian Bale, who in true Method form (fist pump) put on a ridiculously amount of weight and even developed a serious (a little too serious) slouch for his character.  He partners early on with Amy Adams’ character, who also reinvents herself as a con artist…

Amy Adams…I think the first time I noticed was as the innocent in another con film (ironically), Catch Me If You Can.  And over time, she’s done well picking parts that use her sexuality but remind you she’s a true actress as well.  I say that to say that forever I’d see her in something and say, ‘Not that long ago, Julianne Moore would’ve played that.’  And the costume design (the only Oscar lock in my opinion) goes a long way, but in this film, HO. LY. CHRIST.  She’s not ‘kind of doing a young Julianne Moore thing’ anymore, she just took her dirty heels and grinded them all in Julianne Moore’s couch.  Amy already arrived, I’m just saying that comparison is done now (at least in my mind).

Everybody in the cast delivers.  The current It Girl, Jennifer Lawrence, pulls her weight to no surprise (figured she was in the story more, but her character turns the story a couple of times).  The homie Louie C.K. has a nice supporting role as the put upon boss of Bradley Cooper’s character.  And even though I knew he has a scene, I was still very happy to see one of my all time favorite actors do a nice cameo to further the story.  Not ruining it if you don’t know who I’m referring to.

I think the film wants to be GoodFellas… but there were a few places I thought I could have been tighter.  But still, solid film, all the way around.  Worth seeing.

One thought on “‘American Hustle’”