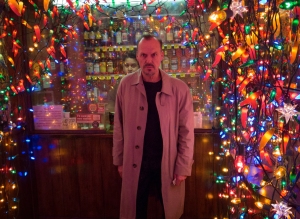 ‘You confuse love with admiration.’

Can I stop right there?  Please?  Alright, I’ll write a full review…

No surprise why so many actors/artists/Hollywood types love this one.  The original Dark Knight, Michael Keaton, stars as a past his prime movie star who tries to return to relevancy by staging a Broadway play.

The rest of the cast: Amy Ryan (why isn’t she working more?) as his ex wife who genuinely loved the man more than he loved himself, Zach Galifianakis playing the straight man as the lawyer holding it all together, Naomi Watts as the beautiful actress with self esteem issues (fighting off a million inside jokes).

And also nominated for golden men: Emma Stone, evolving out of different versions of the ‘nerd dream girl’ to play the fresh out of rehab daughter of Keaton’s character.  Between this and doing ‘Cabaret’ on Broadway, she’s taking advantage of the chance to show she has some range.

And in the future Malik Aziz role, Edward Norton as the smart and talented Method actor who is an arrogant, unrepentant asshole.  Personally, I’m kind of ‘over’ actors spoofing their reputations for a laugh, but thank God we got to see Edward Norton playing ‘Edward Norton!’  None of you who know me well will be surprised that the ‘movie star or actor’ scene Keaton and Norton have about halfway through is one of my favorites this year. Any other year, I think Norton would be a shoo in for the Oscar, but not this year.

Everything revolves around Keaton though and he carries the weight.  It’s not even a Batman bias here; it’s really fun watching him play a comedic lead again.  ‘Birdman’ isn’t one of the frontrunners for Best Picture by accident.  I haven’t even touched on the great cinematography or the drum score (my God).  Yeah, I was all in on this one from frame one.