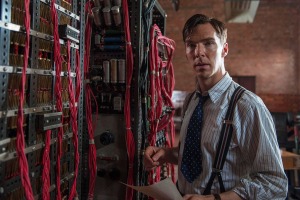 For better in this case, I knew next to nothing about Alan Turing going into ‘The Imitation Game’, so I could watch this film with fresh eyes.  The Cumberbatch headlines an all star English cast in this story of a man who is considered the father of the computer.

Set in World War II England, the film tells the tale of how Turing, clearly a brilliant mathematician, had to overcome his complete lack of social skills to lead a team of geniuses in their quest to crack the Nazi code system known as Enigma.  And he had to do this while masking his homosexuality (which at the time was still an actual crime).  The film isn’t about that per se, but I did find it interesting that it took the time to touch on how much things have changed, or not changed in terms of our attitudes on homosexuality and sexism (through the use of the Keira Knightley character).

Anyway, I liked this one more than I was expecting.  My attitude on this may be ‘colored’, but I always associate Cumberbatch with Sherlock and Khan, so this was a nice reminder that he’s also capable of playing brilliance as a different type of outcast.  And I know Keira does a lot of period dramas, but she had some (different) notes to play here as an actor besides being pretty, which was a welcome sight.

Favorite scene in this one was the scene where he actually explains the title.  I won’t spoil it for you; check out the film if you want to know.