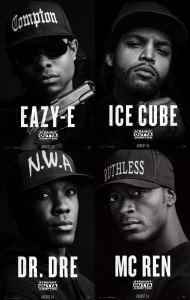 Well, you guys know my code. I’ll constructively critique projects my friends work on, but can’t judge the things I have skin in.

I was blessed to work on the first day of shooting of ‘Straight Outta Compton.’

I’ve done 3 person student films and the big Hollywood blockbusters.  I say that to say it’s nice when the stars align and you see a lot of your tribe in front of and behind the camera.

The job itself?  Well, you go to wardrobe, and they pick an outfit for you to look good in, you go to holding and F. Gary Gray and company match you up with a pretty girl who you ‘match’ with on camera.  In between camera setups, you look over your shoulder and there’s Dre, giving you the ‘Sup?’ headnod.

I have debased myself for less money doing things that shame me more.

Anyway, my shoulder makes a three frame appearance in the final trailer.  If I’m in the final cut of the film, keep an eye out for me walking around outside when Dre gets out of jail.

And finally, for those of you who like my ‘overly elaborate character backstories for background character parts…’

Willie Jackson didn’t know what to tell his woman when she bailed him out.  It was the perfect plan, and it’s not like he hasn’t been doing this since he was a teenager. Selling ‘official’ Prince tour shirts outside the Forum? He netted a quick $2500 without trying!

Before Denesha bailed him out, Officer Scroggins gave Willie an ultimatum: buy that one way ticket back to St. Louis, or take his chances and catch a ‘stray’ bullet in the back.  Denesha is more than happy to start over again in the Midwestern suburbs, but Willie isn’t walking away that easy. Not when he’s got 1000 fresh ‘Let’s Get It Started’ black tees to unload at the MC Hammer concert at the Greek!  Scroggins has no jurisdiction there and Willie doesn’t have a rep in that part of town.

Little does Willie know Scroggins pulled some strings with his higher ups.  The Chief has set up a task force to shut down all vendors who target concert events to sell their wares illegally.  Their first target?  The MC Hammer concert at the Greek.

The night of the concert, Willie tells his woman he’s going to play cards with the boys.  She doesn’t believe him, but what are you going to do?  He’s a grown man with a trunk full of counterfeit shirts.  Willie drives to his destiny.  But will he drive back home tonight?

My understanding is there’s also 140 or so minutes dedicated to the story of N.W.A. as well.