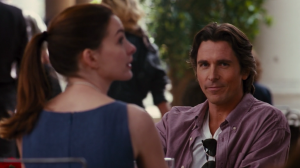 First, the Oscars: a few slight surprises in my opinion, but for the most part the nominations went as expected.  I went back today and added the tag ‘oscars 2014’ to the posts of the films I’ve seen so far, so if you missed (or want to go back) and check out my opinions on some of the heavy hitters I’ve seen to this point, click the tag and you’ll find those reviews.

Now on to this weekend, the final go round for ‘Christian Bale: the Musical!’  Officially adding Mr. Freeman to my impersonation pool has been fun, the mustache has played all too well, and the people who’ve come out have enjoyed the show.  It’s fun to work with a troupe and my learning moment from this show is how much I’ve fallen in love again with performing in front of a live audience.  When the crowd is loud, you feel like you can do anything; when the crowd is quiet, you spend more time thinking on your feet of how to engage them.

And who knew I would knock out one of my actor bucket lists go to moves on this show?  It’s never been in the script, but during the last dress rehearsal I got pulled out of narrator mode to join the rest of the cast for the reprise.  Didn’t ask for it, but just the way things fell, I get to cock my fedora to the side, sing a little, and walk off to a fade out.

Yeah you know why I always wanted to do that…

Last weekend gang, come on out!  Get tickets at naileditprod@gmail.com

Everyone outside of L.A., have a good MLK Weekend!