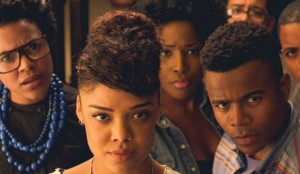 For my generation, we all looked up to Spike (with John and Reggie not far behind).  and in those days, it’s fair to say we all had some form of a ‘hero complex.’  Without getting into a much bigger conversation about black leadership in America, what we grew up on is ‘one voice up front that speaks for everybody.’  We kid each other now, but I can recall many early meetings with friends that usually started with someone walking in the room more or less saying ‘I’m here now, so you got what you need to make a movie!’

What hip hop has evolved into for the past couple of generations, and the (thankful) direction black filmmakers have been successfully growing into is the much more true to life idea that there are several points of view, even those who contrast with each other, that are all ‘authentically black.’

(How’s that for a segway into the micro?)

Dear White People is built around four archetypal characters every black person (especially if you went to college) will recognize: Tessa Thompson as the biracial kid who’s metaphorically yelling Black Power louder than most of the ‘fully’ black kids. Tyler James Williams as the (closeted homosexual) kid who’s not quite black enough for the brothers, but too black to hang out with the white folks.  Teyonah Parris as the bougie black person who goes a little too far to prove she’s not like ‘those hood black people.’  Brandon P. Bell as the good looking, and polished legacy kid whose every decision is setting himself up to be ‘The Guy’, right on down to the white girlfriend.

The jokes come quick and hit the bullseye when the come, especially in the first half.  There’s a Gremlins joke that I think is in one of the trailers that’s still funny.  There’s a throwaway line that you have to take as a direct reference to Dawn on Mad Men (where Teyonah appears often but doesn’t give her the opportunity to show the range and the sexuality that she does here, and I LOVE Mad Men.)  There are other direct and indirect references to Spike in the film.  Do I see Dear White People as School Daze 2.0?  Yes I do, but that’s by no means an insult.

Do I think it’s a perfect film?  No.  I have nitpicks in the third act and (like a true Spike Lee joint) there were some tone changes and convenient circumstances I didn’t really go all in for.  But as a first film?  Go back now and watch She’s Gotta Have It.  Even Spike has publicly said how much now he hates some of the choices he made with the third act of that film.  Look at the progression Ava DuVernay has made I Will Follow to Selma.  The young brother who directed this film, Justin Simien, he’s clearly got talent and he has a ‘voice’ that’s not what everybody else is doing.  I for one, look forward to seeing what he comes up with next.