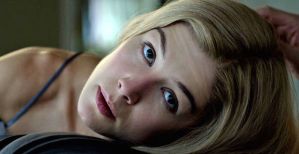 That’s a pretty good one word reaction to Gone Girl, right?  Trading notes with my male friends, it’s definitely up there with Fatal Attraction and Unfaithful on that ‘Married Man Worst Fear’ list.

What can I say without spoiling the film?  If you’re a David Fincher fan, I can’t imagine you will be disappointed.  I’m reminded again he’s on that short list of directors who, if they want you for a part, you probably say yes, script unseen.  Speaking of, Tyler Perry!  I’m not as surprised as some, but yeah.  He wasn’t distracting, or pulling you out of the story with his appearance, was he?

And Affleck (clearly carrying the extra Prince of Gotham weight) was appropriately douchey and sympathetic as the story played out.  The star and certain lock for a Best Actress nomination Rosemund Pike, well what can I say?  I’m aware this is an adaptation of a popular book (so there’s a lot on the page) but you still need committed actors to play the parts.  And I believed her in that role.  Completely.  Too much.

So if you haven’t gotten around to seeing Gone Girl yet, well worth your time.