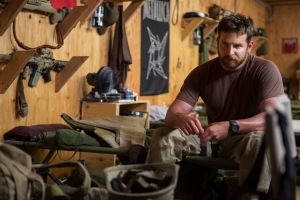 Bradley Cooper gets his third nomination in a row as the title character in this Oscar nominee.  To address the personal elephant in the room, ‘Can I separate our obviously different ideologies from Clint Eastwood’s craft?’ The answer: I (try to) do it all the time when it comes to art.  Saying this film is superior to ‘Jersey Boys’ and ‘J. Edgar’ in not a debate in my opinion.

Based on the true story of the most ‘successful’ sniper in U.S. military history, Cooper puts on the weight and takes on the Texas accent to play Chris Kyle, the All-American hero who goes from cowboy to assassin.  Sienna Miller is for the second time this awards season barely recognizable as the wife of an American hero whose life is cut short.

is this film a pure propaganda piece?  I’ve heard that argument, but I saw it more as a character piece (Chris eventually feels the psychological effects of war and all the murders he’s committed in the name of country). Eastwood and Cooper are both golden boys for their generations, so if voting blocs get splintered, they have to be serious dark horse candidates for Oscar.