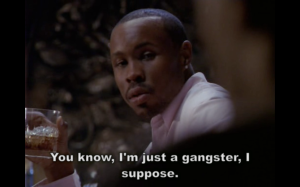 This is not a political post, but before I start, I have to acknowledge today’s events…

For my non-black friends and readers who mistakenly believe ‘all’ black folks fall on the the same spot on the political spectrum, you are about to see EXACTLY how conservative and/or liberal black folks can be when certain ‘issues’ are brought to the forefront.  I’ll stop there for now since, again, this isn’t a political post, and if we do need to have that discussion, we have from now until November.

As far as you’re concerned Obama, you genuinely surprised me today.  I never doubted where you stood, but I know you’re smart enough to know taking a stand now would alienate and polarize one of your key demographics.  In an election year!  But you did what any any real leader is supposed to do, you chose to take a stand on the right side of history at the possible/probable expense of some popularity in the here and now.  So, Salut Mr. President.

So my favorite TV show ever is The Wire.  Once a year since it’s stopped airing, I’ll watch all five seasons in succession just because I still enjoy it that much.

Anyway I’m midway through Season 3 and I get to the sequence of Avon’s coming home party in the nightclub.  (trust me, that’s not a spoiler)  I was reminded that one of my dreams when I was going through my Carlito Brigante phase was to own a nightclub.  That’s the part of my personality that loves going out and being around people.  A conversation with one of my frat brothers reminded me though, I did ‘own’ a nightclub in college.  I just got out of the Game before all the bad things went down.  People got shot, huge gang fights, brothers got subpoenaed to appear in court.  Yep, in college.  I’m not crazy about the concept of ‘luck’, but I do acknowledge that I’ve been pretty good over the course of a lifetime at cashing out my chips before things turn really sour.  Some of my female friends have also told me they consider us a microcosm of my personal life (all the perks, none of the drama).  I can’t print my response to that on the interwebs because my family reads this space, but let’s just say I strongly disagree with that assessment.

I do think though the nightclub metaphor has a lot of value.  It’s ‘the grass is greener’ philosophy, but taken to 11.  I don’t know how much of this is built into ‘the American Dream’, but most of adulthood seems to be basically chasing…something.  Money.  Sex.  Love.  Career.  But sometimes you get so caught up in ‘the chase’, you don’t see or acknowledge that what you want is right in front of you.  I’m as guilty of not recognizing what’s in front of me sometimes as anyone else.

So the moral to the story is don’t forget once in a while to stop, close your eyes, take a deep breath, stop thinking about what’s ‘over there’ and look at what’s ‘here’.

Now, if you’ll excuse me, I plan to have the grand opening of ‘Twisted Steel’ in downtown L.A. around Spring 2013, so I have a lot of work to do.

2 thoughts on “The Chase”