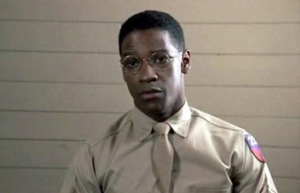 As promised, here is the backstory for the character I play (uncredited) in Star Trek Into Darkness: Starfleet Captain ‘Sweet’ Lou Garner:

‘Sweet Lou’ earned his nickname not as a ladies man, but for being one of the best pool hustlers ever accepted into Starfleet.  It is one of the great ironies of his life that he only joined the Academy after losing a game to his cousin Uhura, who knows most (but not all) of Sweet Lou’s tricks.  First cousins on they mama’s side, Uhura was happy to see Lou’s naturally analytical mind used for something more productive than running tables and taking Social Security checks off old hustlers in Wyandotte.    Sweet Lou’s aunt asks if he ever sees Uhura with any nice young black men, but Captain Garner wisely plays the dumb role.  He’s not old school like the generation before him.  Besides, everyone in Starfleet knows he’s had a Ferengi or two, who is he to say something?

More than anything though, Captain Garner and Spock hit it off pretty quickly.  Two minds that love to look at problems and probabilities and the different angles you can use to try to solve them.  Spock gives Sweet Lou ideas about places he hasn’t traveled to yet; the Captain tries to introduce Spock to the idea of being ‘smooth’: neither is overly successful yet, but they appreciate the effort to be amiable for Nyota.

So that’s that.  I’d say more about the scene, but this is a spoiler free zone.  Next week, I start talking about my June project.  Have a good weekend!