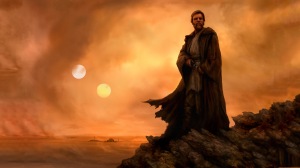 Returned to the director’s chair. Made a quality short that will find a new audience every holiday season (like the film its based on, ironically). Wrote my first original pilot. Wrote my first spec based on a TV show I love. Producer on another ‘legacy’ project that’s one of those ‘once in a lifetime’ things I’m thrilled to be a part of. The period of time from the last Ramadan to this one has found me in another peak period. Stability and consistency have arrived.

I’m mastering how to be as efficient as I can, I’ve reverse engineered the remaining details.  It’s happening.  The endgame (which we’ve half jokingly, half seriously called, ‘Muslim Clooney’.) Not as one giant home run swing, but by stringing together all the daily and weekly victories.  Far from over, but constant forward motion.  With a lot of help and support from many of you, I’ve worked myself into a position where I can think but not ‘overthink’, I’ve created a sense of ‘home’ (stability) which makes me more confident in myself and my natural voice.  We still have more fun than we should at times, but I’m reverting back to being more selective about when and where and in front of whom I act like the ‘devil may care goofball who doesn’t take anything too seriously’ and re-establishing my go-to move as being the ‘socially conscious, politically aware artist who prides himself on being a world citizen.’ The consistency.

Part of it I guess was aging into it, but I’m completely comfortable in ‘my spot.’  When I was younger, I’m sure some people thought I’d be some version of DeRay McKessen.  I love and support what that brother is, but I don’t know want his life.  When you hear me hype up Ava DuVernay or Issa Rae, I’m not angling for a gig; their voices and what they represent are important as well.  Even the young brothers who at some point maybe I was ‘suppose to be’, like Justin Simien or Ryan Coogler, I feel no envy.  They’re not telling my specific story or doing what I specifically do. I now live in the moment more than I ever have, but my eyes on the Big Picture; something bigger than I will ever be and something that will be here long after I’m gone.  This may be an easier statement for someone as defiantly individual as I am to say, but I believe it’s true: you will be challenged at every turn, you will have to fight for what you believe in at every step, but, what’s meant for you? No one can take that from you.

So back to this moment. The past couple of weeks I’ve started to strip away the unnecessary things, and this is part of it.  As much as is practically possible in 2015, I’m taking a social media and blogging hiatus for Ramadan (which starts later this week.) As I’ve told the people close to me, for the first time in I don’t know how long, I don’t have to ‘fix’ anything in my life.  I can routinely place my hand on the brass ring, but haven’t quite put my fingers around it. So my goal is making sure I maintain and continue to build upon my (say it with me now) stability and consistency.

I’m off for deep meditation and to protect the Future here in the dry lands.  If it’s meant to be and the time is right (say mid July?), we’ll get back to it.